STRAY made their mark in the late 60s by owning lighting rigs, pyrotechnics and transport in a time when most bands were content to just get up onstage and play.

At this point the average age of STRAY members was 14. Steve Crutchley quit to pursue traditional Jazz and was duly replaced by Richie Cole as STRAY became regulars on the London club circuit, performing at such venues as Shepherds Bush Goldhawk Club and Covent Garden’s Middle Earth.

In May 1969 STRAY supported THE GROUNDHOGS at Southall Farx Club and signed to Transatlantic Records in January 1970.

STRAY appeared at their first Reading Festival in 1971, alongside such acts as RORY GALLAGHER, MEDICINE HEAD and VAN DER GRAAF GENERATOR. Later that year the group also made their debut TV appearance on the show ‘Disco 2’, although a gig the same year at the Weeley Festival found STRAY in bother with the coastguard when stage flares were mistaken for a distress call by the local lifeboat! 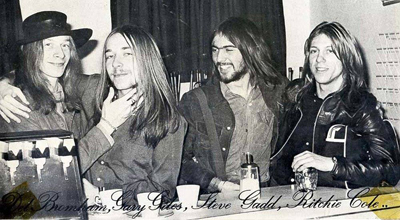 STRAY’s first British headline tour in the winter of 1971 had RED DIRT and STEVE TILSTON supporting. The band would also tour Europe as support to TEN YEARS AFTER. They would promptly return to the UK for more support shows to the likes of STATUS QUO before touring nationwide with THE GROUNDHOGS. At this point STRAY took on the services of manager Wilf Pine.

STRAY’s line up remained stable until 1974 when an additional guitarist, Pete Dyer, was recruited. Gadd departed during the recording of ‘Stand Up And Be Counted’, leaving Bromham and Dyer to share lead vocal duties. The band undertook their first American dates in July 1975, performing with SPIRIT and CANNED HEAT and then found themselves as support in 1976 to the debut British tour by KISS.

The band gained another prestigious support for Canadians RUSH on their first British venture and, for a bit of added publicity STRAY found themselves for a short while being managed by Charlie Kray, the brother of the infamous Kray twins. Unfortunately, despite progress being made with live shows and recording STRAY split in December 1977 dogged by management and financial pressures.

Del Bromham would be the first to kick start his career as he signed a solo deal with Gull Records, releasing the single ‘Who Do You Love’ in 1978. He toured the clubs billed as THE DEL BROMHAM BAND.

At the turn of the decade STRAY were reformed by Dyer, Cole and Giles with new guitarists in Don Hollis and Tony Pow. The new incarnation of the band supported SAGA on the Canadian group’s 1981 British tour. however, this line up soon disintegrated – with Pow and Hollis departing in favour of a returning Bromham.

With Del Bromham back in the band STRAY opened for BARON ROJO in Spain during 1982 and Gadd returned for the 1984 reformation that completed a line up including Giles, Cole, Bromham and vocalist Peter Dyer.

In 1987 Bromham was mooted to have been joining NIGHTWING. This liaison in fact led to the formation of RAZORBACK with ex STRIFE and NIGHTWING bassist Gordan Rowley and former NIGHTWING drummer Steve Bartley. Ill health on the part of Rowley forestalled progress however and an album fully recorded was shelved. Bromham later worked with THE KILLER B’S although STRAY reformed again with Bromham, Gadd, Giles and Cole in 1993 for a series of live shows.

In mid 1995 STRAY reformed for a London club show and a live album, released in 1996, was recorded at Dudley’s Robin Hood R&B club. The record found STRAY comprised of Del Bromham, bassist Dusty Miller and drummer Phil McKee. STRAY were still a going concern in 1997, recording an album titled ‘New Dawn’ and touring through Britain during the winter.

The 2001 Receiver release ‘Dangerous Games’ would herald in 35 years as a recording entity. The album, which received commendable reviews, compiled recent live outings from shows in Dudley during 1996 with studio cuts dating to 1997.

It’s worth noting that no less an act than IRON MAIDEN covered the STRAY track ‘All In Your Mind’ as the B side to the ‘Holy Smoke’ single. STRAY would be announced as the special guests to veteran Rockers MOUNTAIN on their Spring 2002 UK tour.