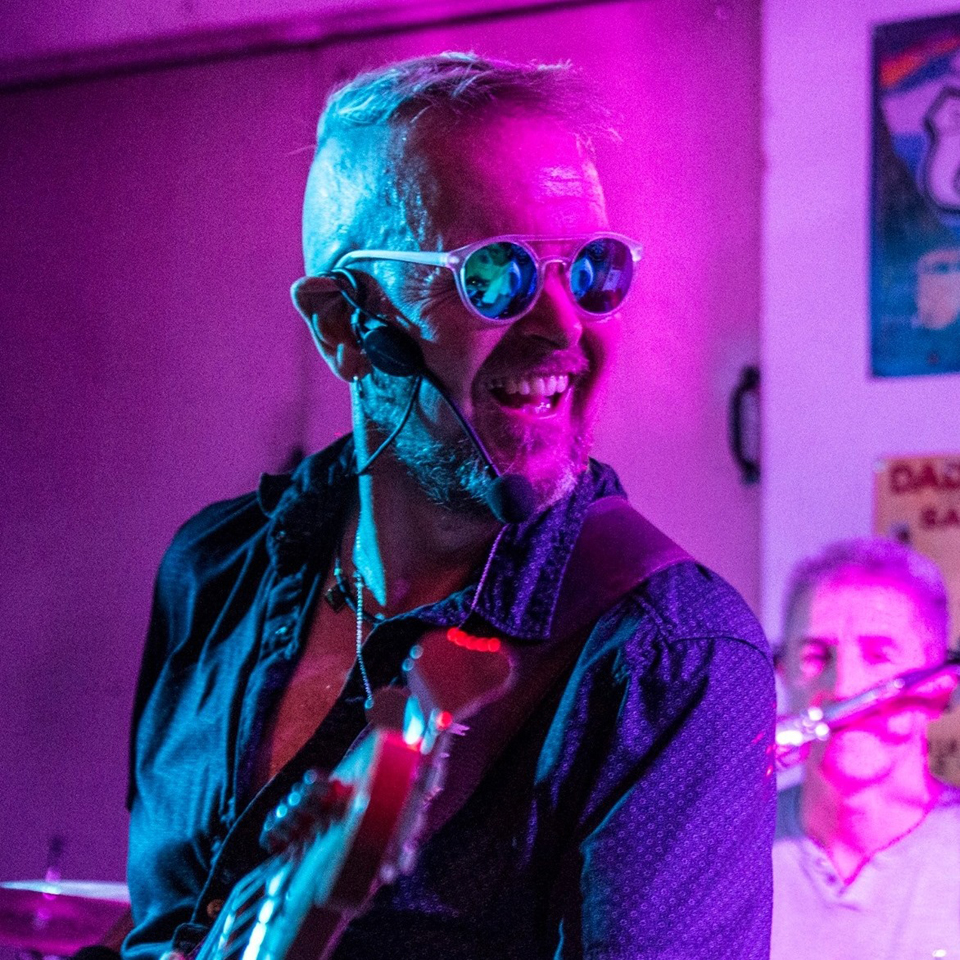 I was hatched in Harlesden – North West London – on a Wednesday. My Dad was well into his thirties when he sired me, so the music I was exposed to at home was mainly classical – martial and operatic – which never really got me going. My cousins were another matter, they lived around the corner and were of mixed English and Jamaican heritage. At their house I was exposed to lots of bass-heavy music – reggae, motown and soul, which I’m convinced planted the seeds for my later journey into planet bass.

I left school, which ironically was in East Acton where Del was brought up, in the summer of 77. I’d managed to pick up Queen’s first four albums (on cassette) in a trade that involved some Scalextrix and with my first pay packet I bought T.Rex’s final album – Dandy In The Underworld and AC/DC’s Let There Be Rock.

It was a fantastic time to be growing up – I’d loved the Glam Rock I listened to during school, punk was kicking off, and the seeds of the NWOBHM were being sewn by bands like Maiden, Praying Mantis, Limelight and Angelwitch. I was taking all this in whilst also discovering prog and heavy rock from Zeppelin, Genesis, Floyd and Purple, and the spacerock of Hawkwind who have remained a great musical love.

I never started to learn an instrument until after I’d left school and I dabbled with keys, guitar and bass, finally settling on the bass. I remember my first ‘instrument’ was a Casio PT30 which made assorted bleeps and blarts and absolutely mesmerised me!

Fast forward a few years and I finally started playing in bands. I was lucky to find an originals band quite early on in my playing when I joined local folk/rock outfit ‘Out of the Wood’. I formed my own originals band ‘Bass Elegance’ and did a stint with ‘The Bighead’ – a Northants-based original Ska Band who are still on the circuit. Other than this I’ve played in numerous covers bands and I’m best known locally for my time fronting The Curvy Love Dogz and supporting on bass in the band I finished up with – Isabelle.

I’ve known Del for a few years and seen Stray a number of times – really enjoying the raw energy of the band live, so when Del approached me and gave me the opportunity to join I bit his hand off, relishing the chance to go back to playing originals at bigger and better venues than I was used to.

I’m not a massively technical player, but I can groove, and for me, feel and taste in your playing, including when NOT to play, are vital ingredients for an effective bass player.

I’m a hopelessly temptable collector of gear so I’m not going to list all of my basses, but I’ve always leant towards narrow necked instruments and I have a weakness for fender Jazz basses of which I own several. Of late I’ve been leaning towards short scale basses and I’m currently rocking a 1978 Fender Musicmaster bass with a ‘double blade’ style strat pickup strung with Thomastic flats.

Amp-wise, I’m currently using a Hartke 500W head with a valve pre and a Gallien Kruger 500W lightweight head into an Eden 4×10 cab.

My current pedal set up is quite simple – a radio system goes into a Boss Graphic EQ pedal, then into a zoom Multi FX where I set up amp sims and overdrives and flange. Then it’s into an Akai Unibass which doubles up my bass with a distorted octave plus a fifth and finally an MXR DI box that I use either to DI or as a boost.

As well as performing live, I enjoy writing and recording – I use Logic Pro X on a Mac and you can check out some of my original stuff here.

Outside of my music world, I love photography, being outdoors in nature, and keeping myself as fit as I can. I like to walk and cycle and practice a bit of yoga. I’m a bit of a spiritual geezer and try to look for the positive in things where I can.